Some of the most beautiful and unspoiled coastlands in Florida are found along the waterway of the West Coast Inland Navigation District. Its southern reaches house an ecological paradise where marine and terrestrial species alike are cradled by countless coves and bays, inlets, and island nursery nooks. The WCIND makes a point of emphasizing the ecological aspects of the waterway and, wherever it can, cooperates with research efforts to further environmental understanding and protection. Some 90 percent of District-managed spoil islands, once condemned as “eyesores,” are now covered with vegetation and provide additional habitat for a host of wildlife. The waters of the bays, inlets, and sounds are still a fisherman’s paradise along this west coast “highway,” offering endless opportunities for the seasoned angler and beginners alike. Few places in the United States can compare with the Gulf Intracoastal Waterway for scenic splendor; naturalness; and the timeless wonders of sun, sea, and sky. Birds are particularly prevalent along the waterway, even within its most populous areas. Wildlife sanctuaries dot the 150-mile route, and a number of WCIND spoil islands and mainland sites have been placed under sanctuary protection in cooperation with ecology-minded groups such as the Audubon Society. The cruising yachtsman will see herons, ibis, egrets, cormorants, brown and white pelicans, roseate spoonbills, seagulls, and occasionally an osprey or bald eagle—often occupying the same sandbar or roosting island. The ICW navigational markers are favored perch sites for cormorants, which have to dry their wings in the sun after diving. Overhead power cables and cell towers are other favorite spots for many species of birds to perch and observe their surroundings. 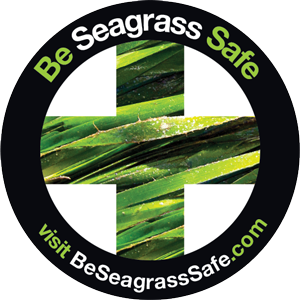 How Can You Protect Manatees?

Seagrass scarring is caused when boats enter shallow waters, causing the propeller to come into contact with seagrasses. This creates damage as the propeller slashes into the bottom, where crucial seagrass root systems are located. Recovery and growth of seagrasses in these scarred areas can take years, and if the damage is repeated, the seagrass bed may never completely recover. Scarring also leaves seagrass beds vulnerable to storms and other causes of erosion. According to the Florida Museum of Natural History, over 30,000 acres of seagrass have been scarred by boat propellers.

Learn how you can protect seagrass while boating at BeSeagrassSafe.com.